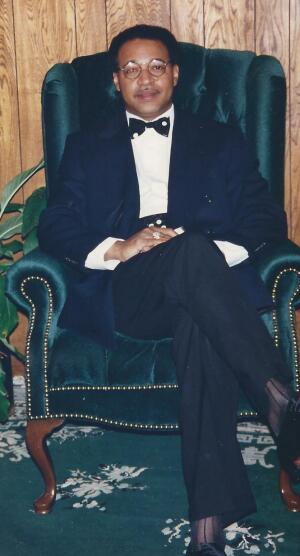 Johnny Allen Morrow, fondly known as “Bootsy” was born October 21, 1954.  He was reared in Jackson, Mississippi and attended Lanier High School and Jackson State University.  Johnny was a well-known and respected entrepreneur, businessman and collector in the Georgetown Community in Jackson.  He owned and operated his own automobile car dealership and detail car shop for decades at Five Points in the Jackson area.  He was the first African-American automobile wholesaler in the state of Mississippi.  Because of Johnny’s extensive knowledge and expertise, automobile dealerships relied heavily upon him to provide dollar figures to trade for automobiles that needed appraising.  To the automobile industry, he was known as Johnny “Retail” Morrow.  He had a passion for collecting and restoring antique cars.  He referred to his inventory as “The Morrow Collection”.  Some of his vintage cars appeared in the movie, “The Help.”

A legend, a thinker, an innovator, a visionary, a historian and a creative genius, Bootsy used his many talents and hobbies to establish a rental hall and multi-purpose complex known as “The Room” located at Five Points in Jackson.  The State of Mississippi House of Representatives honored Johnny with a resolution commending him for his outstanding service and dedication in preserving Mississippi’s unique and diverse history in the establishment of “The Room”.  It was Johnny’s passion and vision to create such a facility to preserve some of Mississippi’s most interesting and fascinating history.  A car enthusiast and history buff, he brought honor to the State of Mississippi through his dedication to this endeavor.  He also garnered national attention for this venture.  Many famous celebrities such as Muhammad Ali, Dan Aykroyd, Snoop Dogg and Morgan Freeman have frequented “The Room.”

Johnny was featured in several media outlets such as The Clarion Ledger, Jackson Advocate, The Northside Sun and Boom Magazine.  He appeared in local news stories and television broadcasts, such as Mississippi Roads, WLBT’s Look Around Mississippi, WJTV’s Mississippi Moments and Focused on Mississippi during Black History Month.

One of Johnny’s many community projects was the development of a magazine entitled Jackson Cars, The Legends of the Automobile Industry.  He began to reflect on the automobile industry pioneers he encountered during his career.  His fascination with their journey to success, led him to publish their stories and contributions to the city of Jackson.  After two years of extensive research, he realized their stories needed to be told.  He took it upon himself to put their stories into print.  As editor of the magazine, he spotlighted and published the accomplishments of the great automobile pioneers in the Jackson area.

In 1965, the Lanier High School Basketball Team Bulldogs was the only Mississippi high school basketball team to ever win a national championship.  It was during the civil rights movement, but because of civil turmoil the team was not properly honored.  Their trophy set in the Lanier High School Trophy Case for 48 years.  This did not sit well with Bootsy.  He organized and brought together state, city and county entities and local businesses and individuals to help with his cause to get the team the recognition they deserved.  Thanks to Bootsy’s efforts, in January of 2013, the Lanier High School Basketball Team Bulldogs received their national championship rings and were inducted into the Mississippi Sports Hall of Fame.  Their story also became part of our nation’s Congressional Record.

On September 12, 1992, Johnny married the love of his life, Hazel.  She was his loving and devoted wife for 29 years.  They enjoyed traveling and spending time together.  He referred to her as his “jewel”.  She was his all.  One Christmas, Johnny surprised her with a Shih Tzu puppy, Prince.  They both adored and spoiled him during his twelve-year life with them.  Johnny’s love for animals led him to surprise Hazel yet again with Kobe, their pet Shih Poo.

Johnny was indeed a “people person” who never met a stranger.  He loved watching football, socializing with his friends and telling jokes.  Bootsy was known as “everybody’s buddy”.  He was admired and loved by so many.

To send flowers to the family or plant a tree in memory of Mr. Johnny Allen "Bootsy" Morrow, please visit our floral store.

A Memorial Tree was planted for Mr. Johnny