Five Generations of Service Since 1925 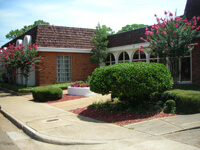 A strategic site was acquired on the corner of Farish and Cohea Streets. In 1925, that section of the City was very popular. Many well-known pioneer citizens occupied lovely well-kept homes in the area. Jackson at that time had a relatively small population as compared to our present population. The sentiment and encouragement of sincere friends and citizens, black and white, gave impetus to the establishment of a new Funeral Home.

A.G. Sampson, experienced licensed embalmer and experienced in Funeral Service with Frazier Funeral Home and Henry L. Denton, experienced embalmer and staff member of Frazier Funeral Home, sought a part-nership in business with Mr. J.A. Stewart, Postman, long recognized for his integrity, honesty and foresight, and E.W. Banks, former Postman, whose ambitions and activities in Church and Civic service motivated the choice of him as a fourth partner. Consultations, arrangements and financial decisions, pro and con, resulted in the establishment and opening of Peoples Funeral Home, November 1, 1925.

Aware of the strength of growth inherent in the concept of a Burial Association connected to the Company, Peoples Burial Association was incorporated in the business. Advertising to the public the catchy idea, "If wives only knew what Widows know," the selling of Burial Policies grew rapidly and made the popular Peoples Funeral Home "The Family of Peoples" as we are so kindly thought of today.

Mr. Walter J. Stewart, young and popular son of Mr. J.A. Stewart, took a most active and creative part in the Public Relations of the Burial Association. We can never forget the genuine love of Mrs. Maud Simon, our very first agent. She can never be forgotten as one of our staunchest supporters. Maybe she could be thought of as "Mrs. Peoples" if someone could not remember her name. Now deceased, she is remembered dearly with loving thoughts.

The depression of 1929 made scars, but Peoples Funeral Home survived and continued to grow, giving employment to black men and women. Every agent, every employee, every satisfied client has been a Pillar of Rock-giving more and more guaranteed dependency in a Company dedicated to serve with comfort and satisfaction.

In 1956, Peoples had outgrown the facilities arranged in 1925. Jackson had grown into a Metropolitan City and the surrounding counties had recognized Peoples as truly a service offered that they could share with the utmost satisfaction.

"Like a Mighty Oak," -a slogan we have displayed on a previous calendar-Peoples desired to offer still better and more modern facilities to suit the comfort and respect of the clients and community of Jackson and surrounding counties. On Sunday, October 6, 1956, Peoples completed a very modern facility and held open house to a large gathering of a proud public. The address was the same, 886 North Farish Street, Corner of Farish and Cohea Streets. The Company has continued to grow with branches now in Hazlehurst, Canton, Edwards, Flora, and Pelahatchie, Mississippi.

For the convenience and financial support of our "Family of Peoples," our own Credit Union was organized. Its growth and support is indeed something to be proud of.

It is fitting and sad to add to these times of growth and good will that we have Memories of those of Good Will and strong contributions from loved ones now deceased. Mr. J.A. Stewart, one of the original organizers and partners, passed from us March 25, 1961; Mr. James A. Stewart Jr., son of Mr. J.A. Stewart, passed from us July 13, 1973; and Mr. Earle W. Banks Jr., son of Mr. E.W. Banks, Sr., passed from us February 2, 1974. God's will is not to be questioned, but how we would love for them to be with us today. They are gone but never forgotten.

Time moved on and constant vigilance and prayerful foresight makes greater things possible. After 25 years of service in our old and what we considered modern and adequate facilities, we now present the most modern and beautiful facility we could erect, all for the comfort and acceptance of Jackson and surrounding counties. We are happy to have given to the Public our very best in Service, Merchandise and Accommodations through all of the 56 years you have entrusted us with the handling of your most bereaved moments in life.

A year of daily grief support

Our support in your time of need does not end after the funeral services.  Enter your email below to receive a grief support message from us each day for a year.  You can unsubscribe at any time.